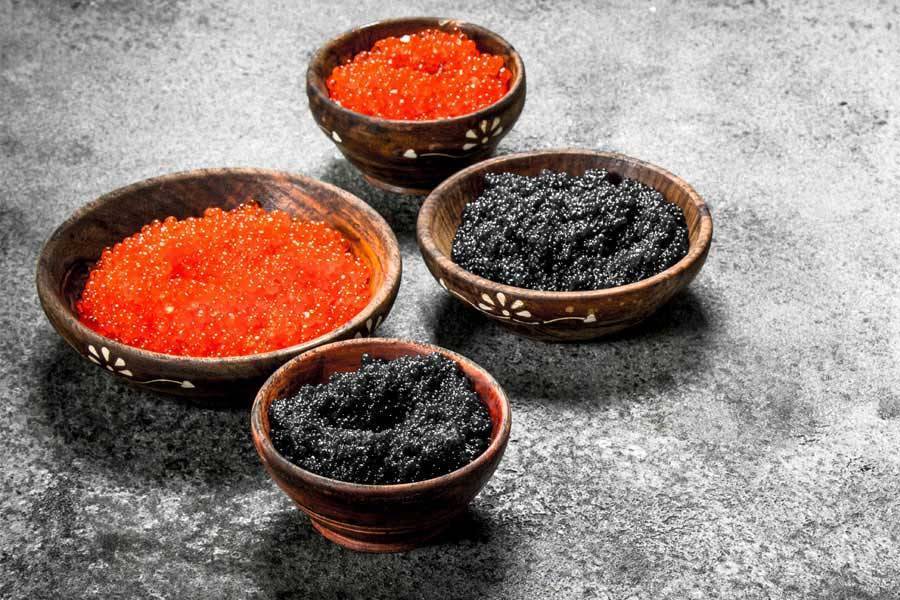 As more and more people around the world discover for themselves the delicacies that are red and black caviar, it’s become common knowledge that it’s not only unmatched flavor but also an exceptional nutritional value of cured roes that guarantees it a firm standing among connoisseurs of exquisite and healthy cuisine.

Consumption of grained sturgeon roe can be traced, by way of written sources, to as far back as 13th century, whereas it would have been a rare and expensive addition to banquet tables of the elite few. Grained salmon roe, on the other hand, is a relative newcomer to both worlds of everyday consumption and high-end culinary art. Red caviar became a staple of Russian aristocratic milieu as recently as the early 20th century, when it was first cured utilizing brine of table salt instead of dry salt method that was and continues to be used in the production of sturgeon roe.

Prior to curing, the roe would be separated from the skein (a sack that contains the roe) by rubbing it through a fine, crisscrossed netting, resulting in well grained, lightly salted caviar. Henceforth red caviar would always be referred to as grained Molosol caviar. The new method of production was quickly picked up by Japanese caviar makers, who beforehand had only purveyed sudjika – traditional Japanese method of curing roe in its skein – soon grained salmon caviar became known to Japanese connoisseurs as ikura, after Russian word for roe – ikra. From that time on, red salmon caviar began to compete not only with customarily prepared roes in Japan but also with black caviar in Russia itself, primarily due to the fact that it was less expensive and more abundant, while all along being delicious. Following the establishment of Soviet Union, red and black caviars continued to be staples of good taste and special standing, for which reasons these were always much sought after. Nowadays, however, both the caviars have become easily accessible to those willing and wishing to enjoy it, indeed, in all corners of the world.

For those who are interested in learning about the origin of our products: All salmon (red) caviar is wild caught in Alaska, USA. Premium sturgeon caviar is sustainably aquacultured in Southeast Asia. Hackleback sturgeon caviar and bowfin caviar are wild caught in the USA. All of our packaging is made in the USA and the European Union. **Please note that not all shipping options are available due to the UPS holiday shipping schedule.** Dismiss